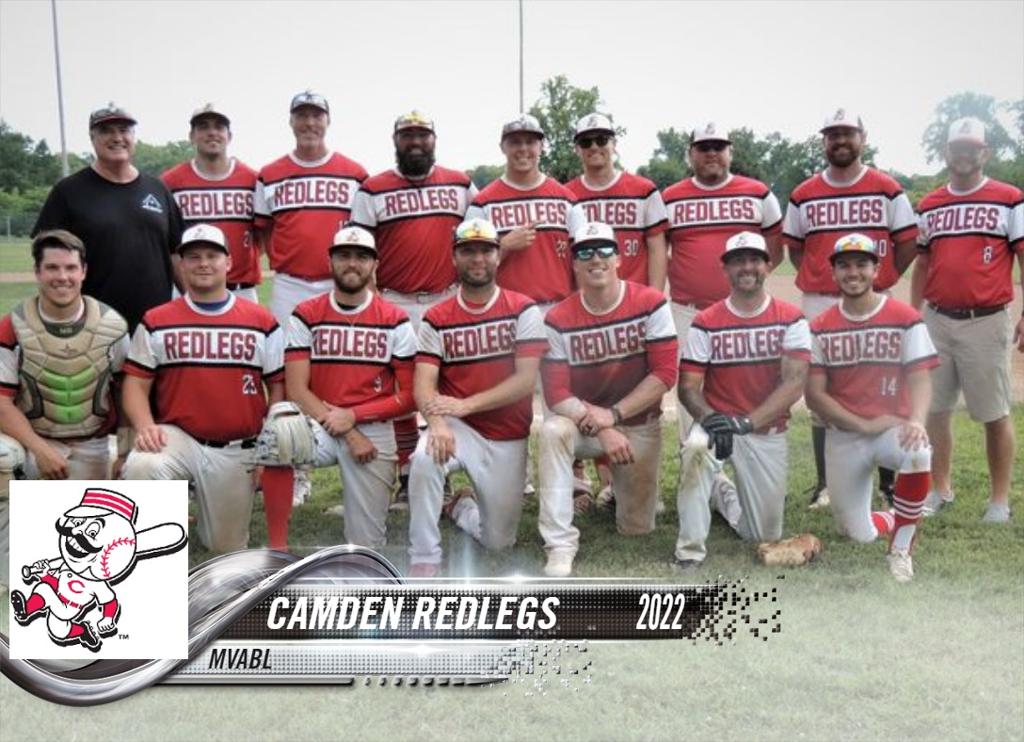 The 3rd seeded boars met up with the 6th seeded Redlegs today in the opening round of the 2022 MVABL playoffs at Howell Field.  These two teams had just seen each other a week before, as they finished off the regular season in a double header where the Boars took both games, knocking Camden from the 5th to the 6th spot in the final standings.

Camden got a little revenge in game 1, as they took a big early lead and held it for the entirety of the game.  Jacob Robinson was hit by a pitch to start off the game.  After a flyout, Kyle Arend worked a walk before Mike Hartman was hit by a pitch to load the bases.  Tyler Eaton then worked a bases loaded walk to plate the first run.  Evan Koogler then singled home a run, leading to a two-out 3 run double by Matt Mattice that banged off the right field fence at Howell, missing a grand slam by mere feet.  Jacob Robinson knocked Mattice home with a base hit in his 2nd at bat of the inning.

The Boars chipped away at the lead, plating 4 runs over the first 3 frames on Redleg starter Jesse Jones.  Jesse then settled in and fired 4 scoreless frames to finish off the game.  Tyler Eaton and Brad Malott turned in two well timed double plays for the Redlegs, the first an inning ending twin killing in the first inning and the 2nd a double play that killed a bases loaded rally by the Boars in the 6th.

The Redlegs got some cushion in the 4th when Brad Malott singled, stole 2nd, moved to 3rd on a passed ball, and was singled home by Jacob Robinson.

Camden scored their final run in the top of the 7th, resulting in what would eventually be the final tally of 9-5.  Jacob Robinson singled with one out and was later driven in by Mike Hartman.

Jones tossed a 1-2-3 7th to nail down his 2nd career post-season win.  Jesse finished the game with 7 hits allowed and 3 strikeouts.

Game two was all Boars though, as they poured in 11 runs in the first 3 innings.

The Redlegs were only able to muster 3 runs.  The first on a sacrifice fly by Joey Watson in the 2nd.  The final two runs came on a bit of a two-out rally started by Mike Hartman.  Hartman singled and then scored on a double by Chris Flaherty.  Tyler Eaton then plated Flaherty with a base hit.

The two teams then took a break and met up the following day to play the decisive game 3.

The Redlegs threatened to take an early lead in the top of the 1st when Jacob Robinson walked and later moved to 3rd on a two-out double off the bat of Mike Hartman, but a strikeout would end the threat and leave the runners stranded.

The Boars then jumped on Redlegs starter Tyler Eaton in the bottom of the 1st, as they used 4 hits and a Redlegs error to score 3 runs (1 earned) and take a commanding early lead.

Camden chipped away in the top of the 2nd when Tyler Eaton worked a leadoff walk, followed by a single by Joey Watson and then a bunt single by Brad Malott.  The Boars were then able to turn a double play, but a run scored on the play to cut the deficit to 3-1.

The Redlegs would then turn on the heat in the 3rd and 4th innings, scoring a total of 8 runs over both frames.  In the 3rd, Jesse Jones worked a one-out walk before Kyle Arend singled to put two runners on.  Mike Hartman than hit an RBI single.  Chris Flaherty then recorded a single, and Tyler Eaton walked.  Joey Watson then delivered a 2-run single.  Later, Evan Koogler delivered the innings final RBI with a sacrifice fly.  Jacob Robinson started the 4th inning with a double and then scored on a fielding error that allowed Jesse Jones to reach base.  Kyle Arend then also reached on an error that allowed Jesse to score, followed by an RBI base hit by Mike Hartman.

Eaton, meanwhile, put things on cruise control after the rocky first inning.  He allowed just one run over his next six innings of work as he allowed his offense to compile their comfortable lead.

Camden picked up two more insurance runs in the top of the 8th, courtesy of a run scoring double by Tyler Eaton and an RBI single by Joey Watson.

The Boars were finally able to solve Eaton in the bottom of the 8th, as the first 3 batters of the inning all recorded hits which prompted the Redlegs to turn to Jesse Jones, who had just thrown a complete game the day before.  Jesse extinguished the threat, limiting the damage to three runs.  Camden still maintained a safe 11-6 lead going into the 9th.

The Redlegs were quiet in the top half, quickly going down in order.

The bottom of the 9th then started with a double and a single by the Boars to put two on and none out.  The next batter doubled to right center field scoring two runs but took a wide turn at 2nd base.  Redlegs right fielder Eric Jameson recognized this and fired a perfect throw to 2nd base, making for an easy out as the runner couldn’t get back to 2nd in time.

With the lead now 11-8 with one out, the next batter singled to try and re-ignite the Boars rally.  Jessed then induced another ground ball, and this time the Camden defense was able to get the force out at 2nd base.  Jesse then tossed another ground ball, this one to short stop Brad Malott who cleanly fielded and delivered to first base to end the game.

The Redlegs will advance to take on the top seeded South Dayton Slammers on Saturday, September 10th at Bellbrook High School at 1:00pm.